Are you using Linux and need to view/edit an IBM Lotus Form; also known as a XDFL file from work?  Well here is how you can get it up and running.  There are a few known issues working with these forms on Linux.  1.) Unfortunately, you still cannot sign the forms within Linux.  2.) A lot of us know we need to fill the line.  While the fonts are slightly different and the form may differ slightly on Windows.  Lets begin the installation.

Wine is a free and open source software application that aims to allow applications designed for Microsoft Windows to run on Unix-like operating systems. Wine is a compatibility layer. It duplicates functions of Windows by providing alternative implementations of the DLLs that Windows programs call, and a process to substitute for the Windows NT kernel. This method of duplication differs from other methods that might also be considered emulation, where Windows programs run in a virtual machine. The name Wine initially was an acronym for WINdows Emulator. Its meaning later shifted to the recursive "backronym", Wine Is Not an Emulator in order to differentiate the software from other emulators. While the name sometimes appears in the forms WINE and wine, the project developers have agreed to standardize on the form Wine.


Once you have that installed you will need to open the Configure Wine application and navigate to the Libraries tab.  It will be empty but we'll be adding additional libraries to make it look like this one. 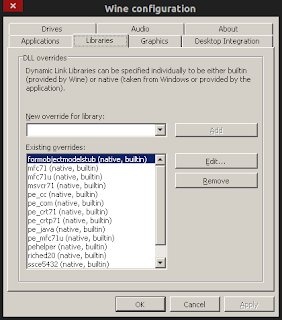 Click in the New override for library  type in the name of the library and then click the Add  button.  Then do it again for the next library in the list. 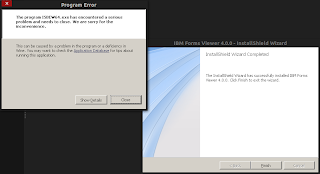 To get your forms to open properly you'll have to install two viewers.  Let's install the first one.  It is Lotus Viewer v8.  You can get it at http://www.nrc.gov and the second one is Lotus Forms Viewer 4.0.0 Fixpack 2 and you can get that one at http://www.e-publishing.af.mil/.  When you install this second one you will get a bunch of errors that pop up.  Just ignore them for the time being and don't touch any of the windows until the installation finishes.  If you look at the install window you will notice that even with the errors it continues to install.  Once the installation window shows that it is complete you can click the Finish button and then you can close the Program Error windows. 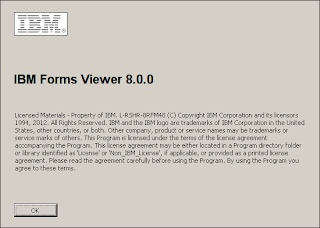 Now that both viewers are installed you can actually open a form.  However, only one of the viewers works while the other just provides libraries to the other.  So yes, both are required but only one will work.  They almost look identical but Lotus Forms Viewer 4.0.0 Fixpack 2 will close/crash when you try to open a form.  Lotus Viewer 8.0 will allow you to open forms.  To find out which one you are using you will have to open a viewer and click Help menu and then click About IBM Forms Viewer within the menu.  You should see this pop-up.  Now you can use the menus at the top to open a form.

Lotus Viewer on Linux for DoD Forms by Randy Rowland is licensed under a Creative Commons Attribution-NonCommercial-ShareAlike 4.0 International License.
Based on a work at https://gregoryhussey.wordpress.com/2013/07/26/lotus-forms-viewer-on-ubuntu-i-think-so/.
Posted by Unknown at 3:09 AM